From the Washington Independent Review of Books:

The Human Cost of Welfare: How the System Hurts the People It’s Supposed to Help
By Phil Harvey and Lisa Conyers
Reviewed by Jennifer Bort Yacovissi, April 20, 2016

It may be hard to believe that a book discussing welfare policy can be described as a page-turner, but here it is. Authors Phil Harvey and Lisa Conyers spend the bulk of The Human Cost of Welfare: How the System Hurts the People It’s Supposed to Help laying out engaging and often compelling arguments in support of the title, but readers may find themselves hurrying to reach the payoff: possible solutions to the endemic problems of the current welfare system.

You don’t need to be a policy wonk to find much that is thought-provoking and possibly eye-opening in here. Best of all, in the midst of this exceptionally brutal and grueling election cycle, it is refreshingly non-partisan. That’s not to say it’s non-controversial, simply that conservatives and liberals will find elements to argue with in equal measure.

Also refreshing is its willingness to remember that, at the core of all of this, we’re talking about human beings, each of whom has a life and a story. The authors have included snippets of some of these stories, which they collected through nationwide field interviews with people on the receiving end of the welfare system — which, as the authors illustrate, might not always be described as a benefit.

The organizing philosophy of Welfare is best summarized by this quote: “‘There is nothing to suggest that people on welfare are lazy,’ notes Cato’s Michael Tanner. ‘But there is also nothing to suggest they are stupid. If you pay someone as much for not working as you do for working, it should come as no surprise that many take advantage of the offer.’”

The evidence that Harvey and Conyers lay out clearly illustrates the unintended consequences inherent in the current welfare system, primarily in the myriad ways in which it offers disincentives to working. The authors’ “fundamental point: earning money is economically dangerous for low-earning families with substantial welfare income.”

They describe the complex, contradictory, and arcane rules associated with the combination of various alphabet-soup programs like SNAP, TANF, WIC, SSDI, and SSI, and the calculus involved for recipients in determining where they will hit the “welfare cliff” — the specific amount of earned income that will cause their benefits to shut off like a light switch.

Looking at the overall system from the 10,000-foot level — which, let’s admit it, is the view for most people not directly involved in the system — it’s easy to see how these rules have come to exist. The simplistic argument is: If you’re working, you don’t need welfare. The next argument becomes: If you can work, you shouldn’t get welfare.

Nowhere is this concept more clearly demonstrated than in the rules surrounding SSDI, the Social Security disability program, whereby it is basically impossible for applicants to get benefits if they are still working — the obvious argument being if you can work, you’re not disabled. As the authors point out, the barriers to work that SSDI puts up “run directly counter to the intent of the American with Disabilities Act, which seeks to empower the disabled to join the workforce.”

Within the solution space, the authors focus on shifting welfare incentives to tie them to work benefits for both the recipients and the employers who hire them. While not revolutionary ideas, since the book addresses much that has arisen from the 1996 “welfare to work” legislation, there is a wide range of suggestions to consider.

Harvey and Conyers find much to like in the Earned Income Tax Credit (EITC), and describe ways to improve and expand the program. They also describe a number of ways to make it less burdensome on employers to hire workers. One unexpected recommendation toward eliminating the current unintended encouragement of poor single girls and women to have children is to provide free access to long-acting reversible contraceptives (LARCs).

For all the valid issues the book raises and to some degree addresses, the underlying implication is that the jobs are out there if only people had the correct incentives to secure them. This is the point on which the book seems weakest: Except for a brief discussion of apprenticeships as a way of training workers in certain fields, there’s little examination of the inherent mismatch between available jobs and the skills of the underemployed.

The authors note the plummeting engagement of working-class men in the workforce, but do little to address the fact that the loss of traditional manufacturing and farm jobs is increasingly offset by higher-skilled work in technology industries with a far steeper learning curve.

Ironically, one of Welfare’s complaints is that SNAP benefits — what we all know as food stamps — are supposed to be tied to work requirements, but almost never are. That changed as of April of this year, though, as most states now require people without children or a disability to work at least 20 hours a week in order to receive benefits.

In the Washington Post on April 1, 2016, Max Ehrenfreund and Roberto A. Ferdman quoted Rebecca Vallas of the Poverty to Prosperity Program at the Center for American Progress: “Making people hungrier isn’t going to make them find work faster.” In many ways, this book argues that it will.

The crux of the problem, though, may be as simple as it is immoveable. Though they’re only describing one suggested program, the authors may as well be talking about all of them when they say, “The major flaw in this plan is that Congress would never bring itself to enact it.”

Truly, it is hard to envision achieving the political will to enact substantive changes to welfare under the bitterly partisan atmosphere of non-cooperation we’ve engendered over the course of the last few election cycles. Perhaps the authors would be willing to hand out copies of this book to new and returning members of Congress as they convene in January 2017.

Jennifer Bort Yacovissi’s debut novel, Up the Hill to Home, tells the story of four generations of a family in Washington, DC, between the Civil War and the Great Depression. Jenny is a member of PEN/America and the National Book Critics’ Circle, and reviews regularly for both the Independent and the Historical Novels Review of the Historical Novel Society. She is also president of the Annapolis chapter of the Maryland Writers’ Association. 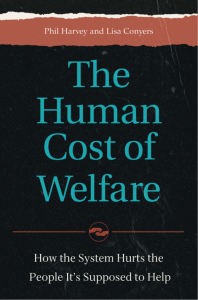 The Human Cost of Welfare shows that welfare programs as currently structured are doing more harm than good to their intended beneficiaries, despite their soaring costs. Drawing on more than 150 interviews across the United States — conducted in unemployment offices, in soup kitchens, and in places where the poor live — this book tells the stories of real men and women and leads to the inescapable conclusion that welfare as currently structured is hurting the very people it is meant to help.

In other words, and contrary to popular belief, welfare reform needs reforming. The main problem revealed by our interviews and research is that welfare programs keep people from working, with crippling consequences not only for them but also for their families and our country. Time and again, our face-to-face conversations revealed the barriers to work that the system erects, and the ways it keeps people from getting past those barriers.

Our book will provide readers with an inside look at how welfare works (and often doesn’t), and provide recommendations for reform drawn from a wide variety of scholars as well as our own recommendations gleaned from our research and interviews.